In this week’s workshop, we continue with the practice of re-enactment focusing on performances that work with image and screen. These re-enactment projects require researching on concepts of the works, performative procedures, equipment set-ups, and audience experience. As in week 7’s exercise (re-creating video installations), you do not have to replicate the work exactly. You may want to re-interpret these works in their re-making/ re-staging in reference to the central concept of the work. Is the work interrogating an element of the cinematic experience? How is this achieved?

A list of works to be re-enacted/ re-staged is as below. You will be assigned a group and a work. The necessary equipment is supplied to create the image content (if applicable) and to perform the work.

‘All are superimposed on each other with the projectors aimed from different angles. The superimpositions create a continually changing colour light mix. I interrupt the beam with a series of formal actions creating a complex set of coloured shadows. The final section involves focusing a pair of skeleton hands onto the screen in relationship to my own hands. The intention with this as with my other shadow pieces, is to build a complex visual experience out of simple and readily available aspects of the projection situation. M.L.G. from ‘Real Time/Space’, Art and Artists Dec 1972.’

‘The screen is white one side and mirrored the other, and is used by the performer to either ‘catch’ the projected image, or reflect it around the cinema space. The image on film is of the same activity happening in a sunlit landscape. Visual echoes are set up between the live event and the recorded one. This performance can include directional sound aimed at the screen, the movements of which bounce the sound around the space.’ 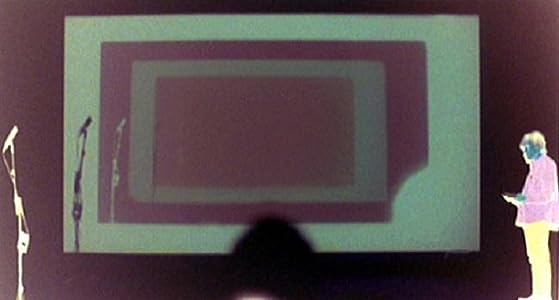 ‘Recent expanded works include ‘2 minutes, forty-five seconds’, which is a film event that is refilmed each time that it is projected. On first showing there is only the blank screen. Image complexity develops through the successive stages of refilming.’

Sherwin stood (barely seen) behind the screen and “painted in” the picture by painting it white, revealing more and more of the image with each brush stroke. The film was revealed to be a recording of himself, standing behind a paper screen and tearing away the paper to reveal himself standing in an open rural landscape. When the tearing and the painting were completed, Sherwin took a knife and cut through the polythene screen and climbed through the immediate space to the space the audience occupied.

Consider the division of labour within your group — is what you doing an effective use of everyone’s time? How can tasks be split up? Use the experience gained in the previous week to plan for how your work will be produced and presented.

Setting up the work may involve installing projectors, lights, and screens. Many of these works require projector(s) to be mounted at a fixed position. You need to find out how this is going to work in practical terms. You must follow OH&S guideline for installing. Please see: http://www.uow.edu.au/content/groups/public/@web/@crearts/documents/doc/uow090099.pdf

The importance of technical testing, or simply getting to know your technical gear, cannot be emphasised enough.